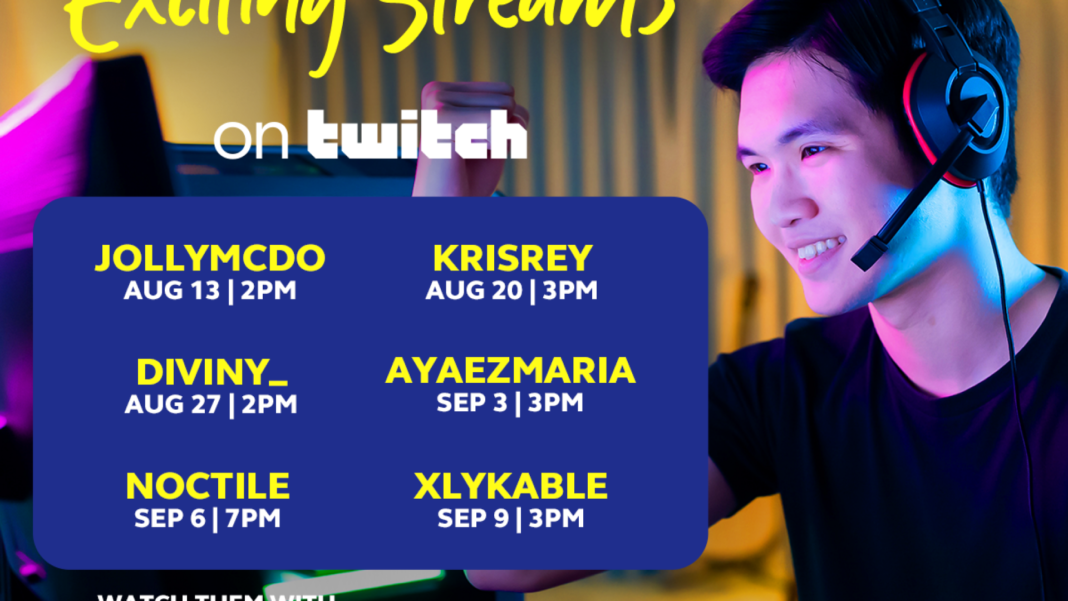 Avid gamers who love to share their gaming experience with the world and turn it into an interactive performance, or those just happy to watch their favorite esports team win in their games as it happens, have all faced the same problem at some point: getting cut off mid-stream due to laggy connection and data interruption.

But thanks to Globe Prepaid’s Go+99 with GoSHARE, gaming enthusiasts and passionate streamers out there can now indulge in the games they love and enjoy non-stop streaming on Twitch — the world’s leading live streaming service for gamers and the things they love. In 2021, the service saw as many as 8 million streamers go live on Twitch every month with more than 31 million daily visitors.

A real treat for every gamer, Globe Prepaid’s latest bundle offers huge data packs and steady network connectivity that allow subscribers to watch gaming streams on Twitch all they want without the frustrating data disruptions. 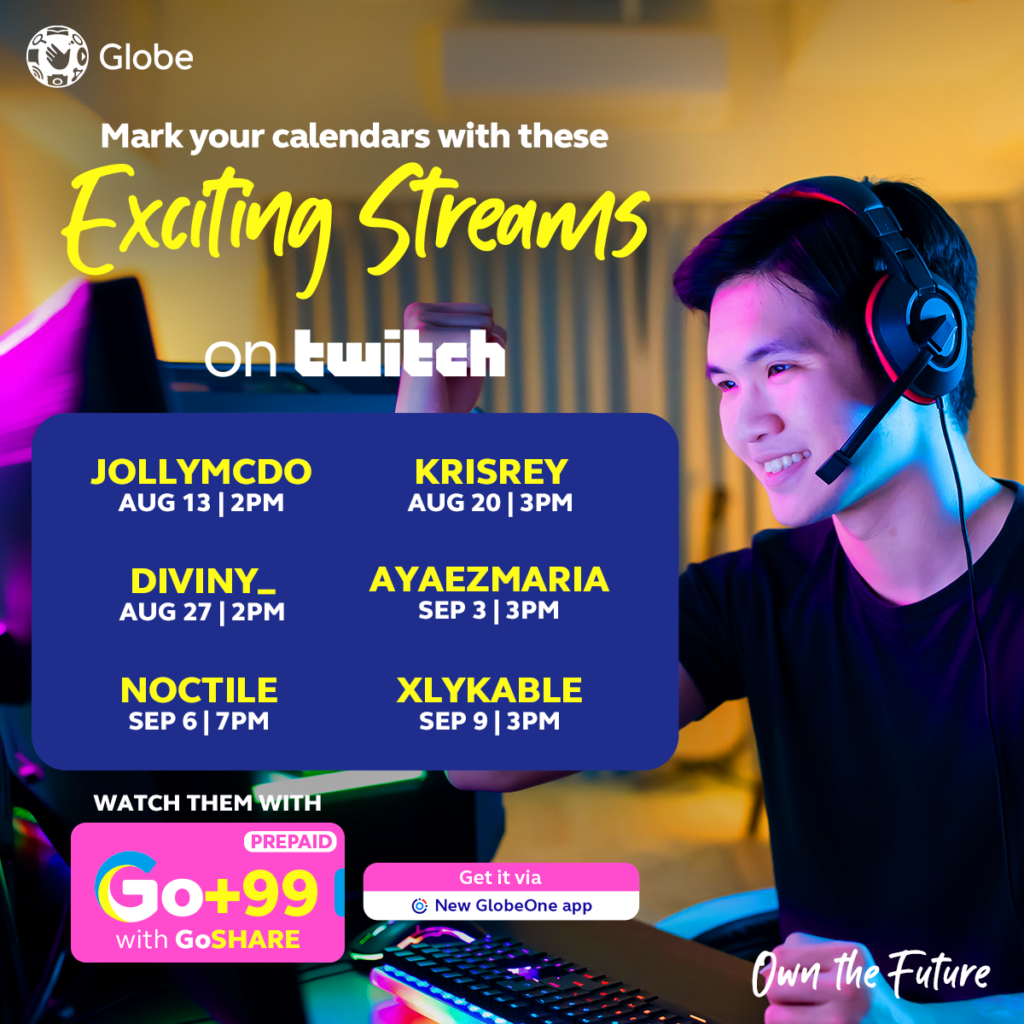 Here are 6 popular and fun streamers on Twitch that you can binge-watch to anytime and anywhere, while picking up a few tips and tricks from them on how to level up in the games you love. Catch their livestreams through Globe Prepaid’s Go+99 with GoSHARE for uninterrupted streaming.

He’s not a professional player but he plays in high ranked queues so he can be every newbie’s go-to on Twitch for some FTW moves and strategies in first person shooter games. He mainly plays Counter-Strike: Global Offensive, Overwatch, Apex Legends and Valorant. Aside from streaming his games, he also hosts tournament watch parties.

Watch his Twitch streams at https://www.twitch.tv/noctile.

Carlo Dave Ballano, known in the virtual world as Jollymcdo, is a voracious gamer, giving his 18,000-strong followers on Twitch a daily dose of thrilling livestreams of his favorite hardcore survival and FPS games like DayZ, Grand Theft Auto V, Valorant and Escape from Tarkov. Avid gamers will surely score a few techniques to level up their own games from his channel at https://www.twitch.tv/jollymcdo.

Krisrey, who has nearly 75,000 followers on Twitch, is a content creator for Oasis Gaming, a Filipino esports team who recently competed in the VALORANT Challengers Tour 2022 APAC Stage 2. Her streams are perfect for those who like some variety in what they watch on the platform: aside from late night streams of her favorite video games like Valorant, you can also find her in co-study sessions, singing and playing the guitar, or Just Chatting with her audience. Follow her at https://www.twitch.tv/krisrey.

She might be a newbie in the streaming world but she’s a veteran online gamer. Her love for FPS games started when she discovered Counter-Strike in 2004. On Twitch, you can catch her streaming her other favorite games: Apex Legends and Valorant every afternoon on a daily basis (except weekends) or Just Chatting with her audience on the service. Join her at https://www.twitch.tv/diviny_.

Aya Ezmaria is any gamer’s go-to streamer on Twitch who has a big appetite for variety. Aya declares herself a paradox: she’s a TV and event host, a HEMA and Muay Thai practitioner, a Cosplayer, an amateur traceuse, a podcaster, an Airsofter and most of all a gamer by heart. Her nightly livestreams include Call of Duty: Warzone and retro games like Final Fantasy, Resident Evil, Suikoden Series, Star Ocean, Parasite Even and Brave Fencer Musashi. Off-stream, she plays DOTA 2 and Mobile Legends.

Catch her Twitch streams at https://www.twitch.tv/ayaezmaria.

Lyka Mea, a popular streamer with over 9,000 followers on Twitch, is a gamer most of her life and has cultivated a broad taste in games. She’s a fan of FPS titles like PUBG, and MOBA games like Mobile Legends and DOTA 2. But her Twitch channel is also an enjoyable source for Valorant, V Rising, Apex Legends content. A veteran host, she also dishes out some chill and comfy content in her Just Chatting sessions. Join her at https://www.twitch.tv/xlykable.

“The dedication these homegrown streamers have for love of the game is truly captivating and inspiring – the community that continues to flourish on their channels is a testament of how gaming can bring people together through pure uninhibited passion, which we hope to continuously fuel with GoSHARE,” said Givielle Florida, Globe Prepaid Head.

Watch them in action in the coming weeks on Twitch as they livestream and keep viewers at the edge of their seats:

Stay in the loop on the latest updates on your favorite Twitch streamers without worrying about any data interruptions by registering to GoSHARE via the New GlobeOne app.