It’s not often that we go to San Juan and eat there though it’s just adjacent to where I currently live. So, I wandered off to the smallest city in Manila to find a new foodie spot! And, I found a restaurant, The Golden Chicken House & Chinese Food Center, a restaurant who’s age is just about same as mine. It seemed that they must be doing something right to last that long, and I was curious to find out why.

They have a simple menu that has been well-loved by the people of San Juan since 1983. A little tweak here and there and their dishes have withstood decades of discerning palates and even a fire that almost took out the restaurant.

A hearty, meaty soup that I love. It was so filling that I was scared that I might not be able to try the other dishes because I had two small mangkoks of this delish soup! 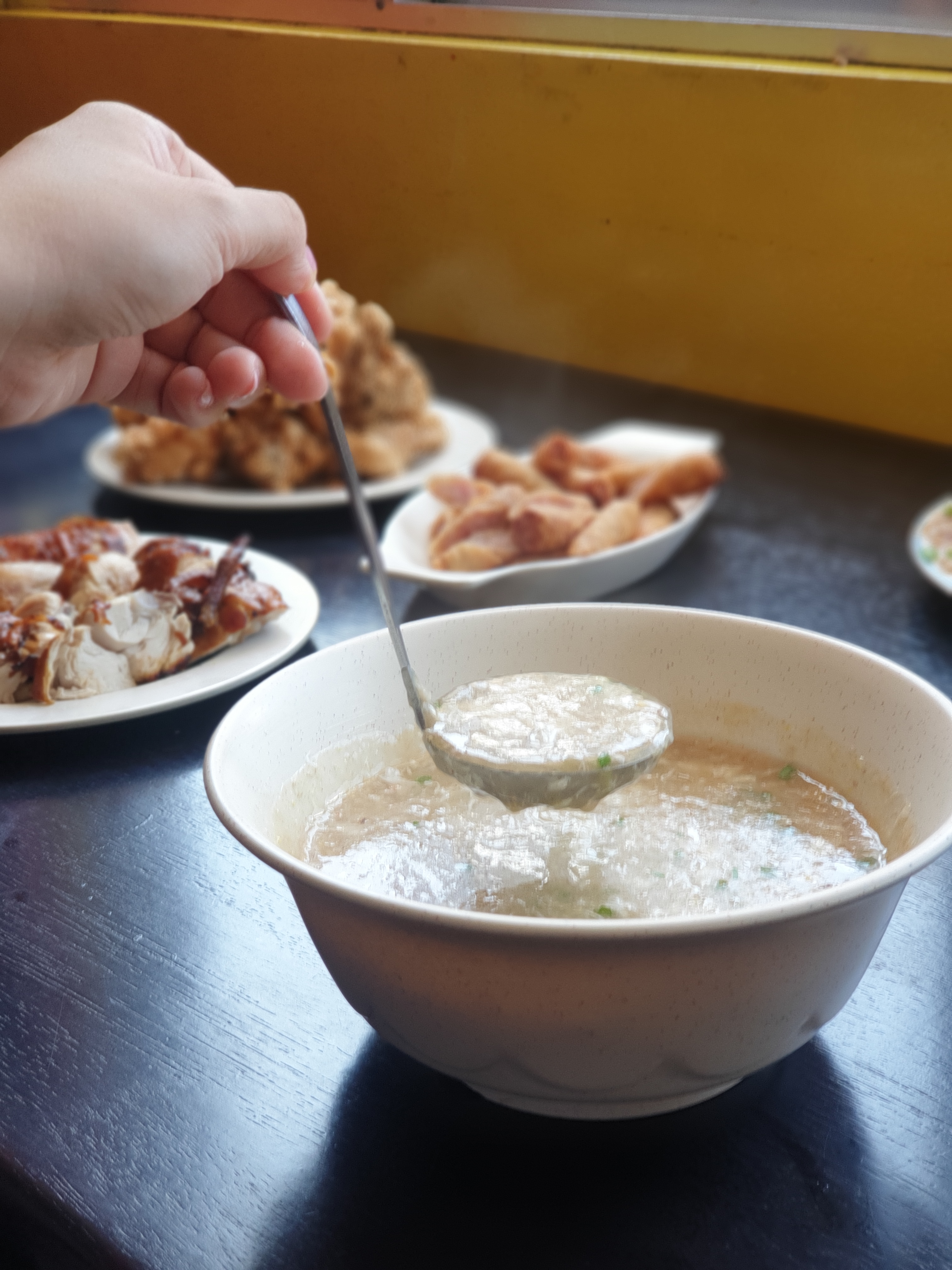 Solid! A yummy dish even made tastier with their pineapple honey glaze and that gravy dip! The chicken was tender and so juicy so nagtake-home din ako! 🙂 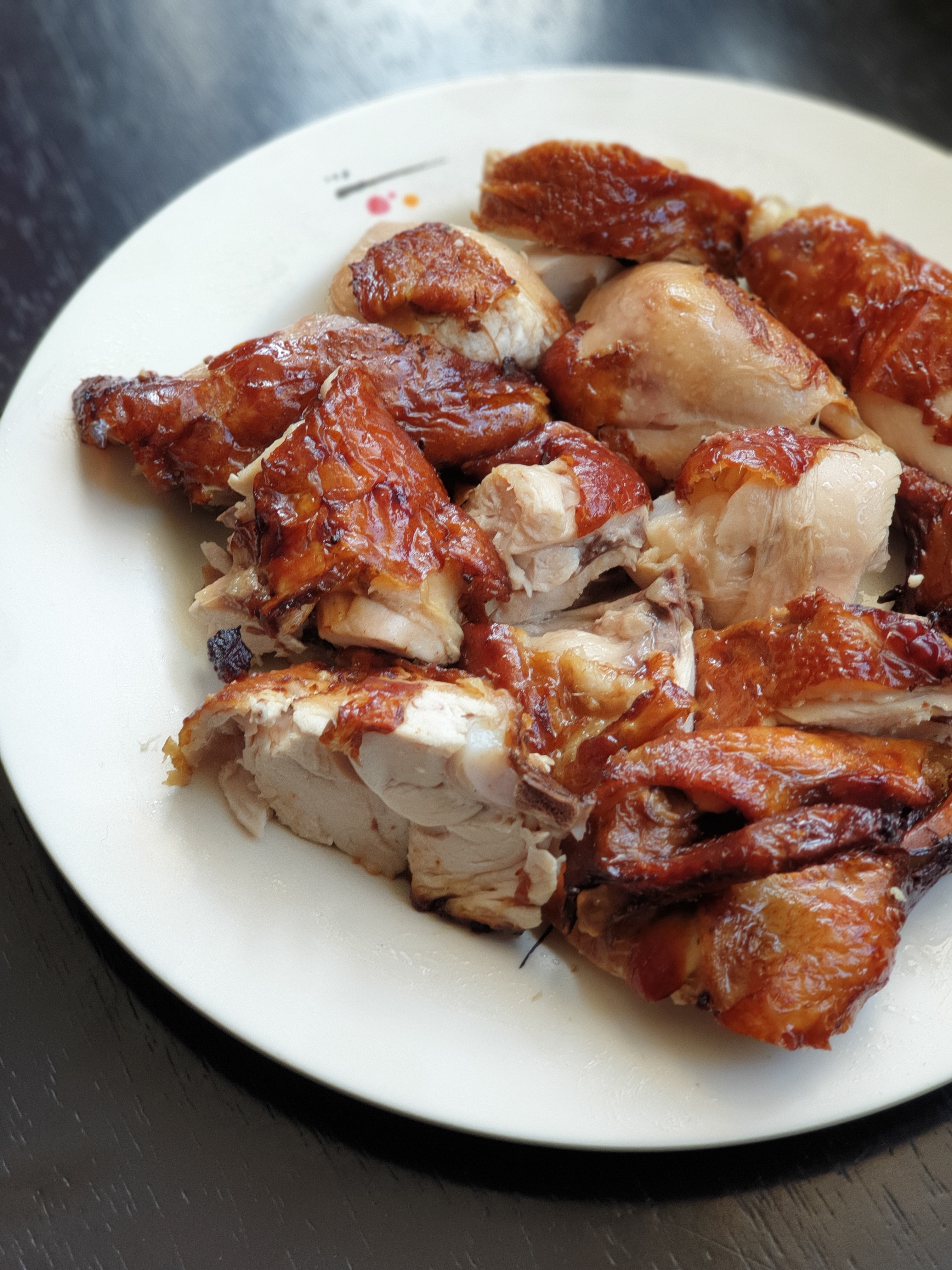 Not so much of a fan of this since I tasted their Pineapple Honey Chicken. I prefer it to have a lot more seasoning but this is a well-loved dish here so maybe it’s just me. The chicken meat was tender and the batter was just the right amount.

Winner in crispyness and juicyness and it is only Php 445! The serving was good for I think 3 to 4 persons. 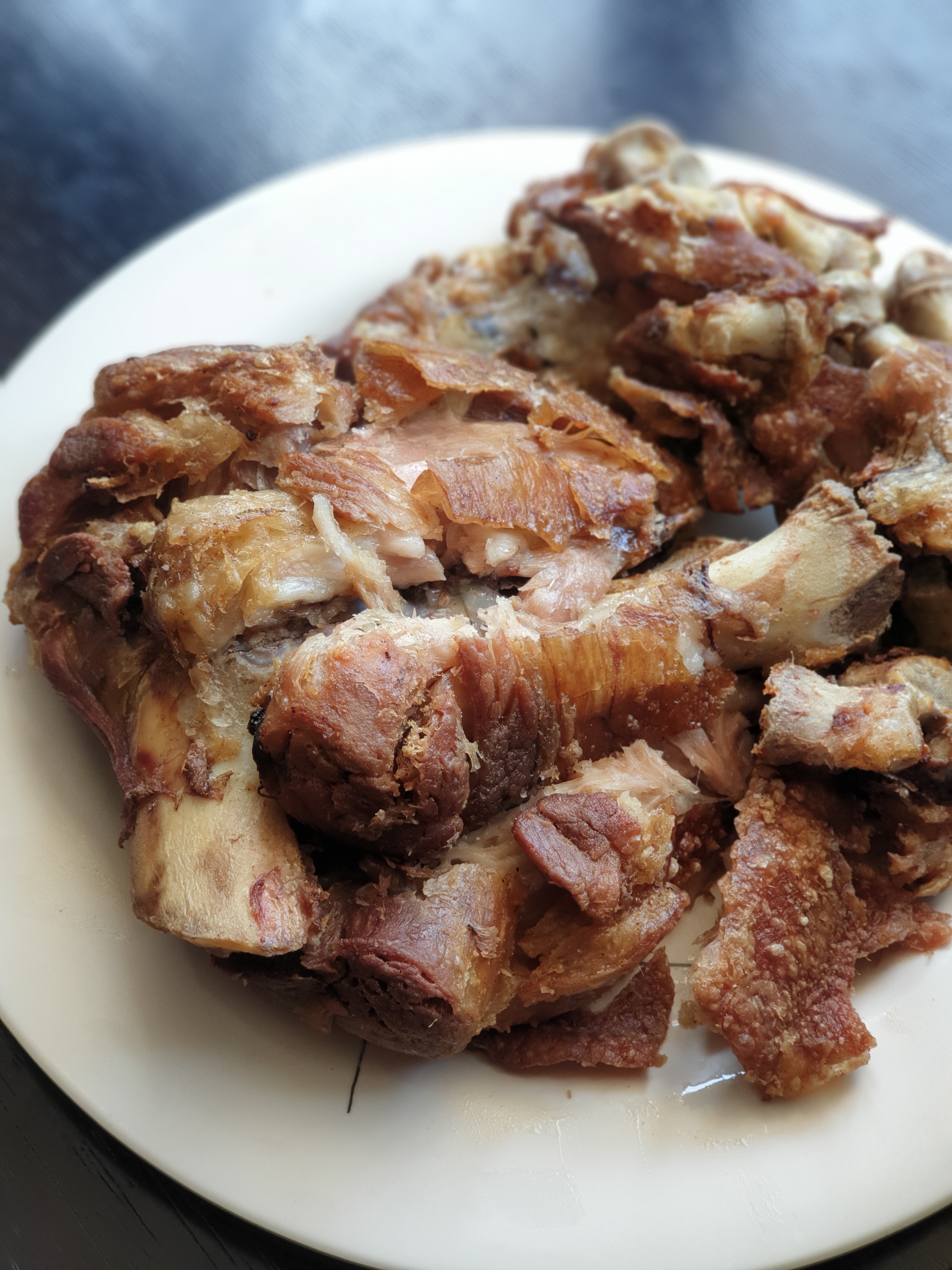 Same price as the crispy pata. The pata tim is tender and doesn’t even need the sauce because it was so flavorful. 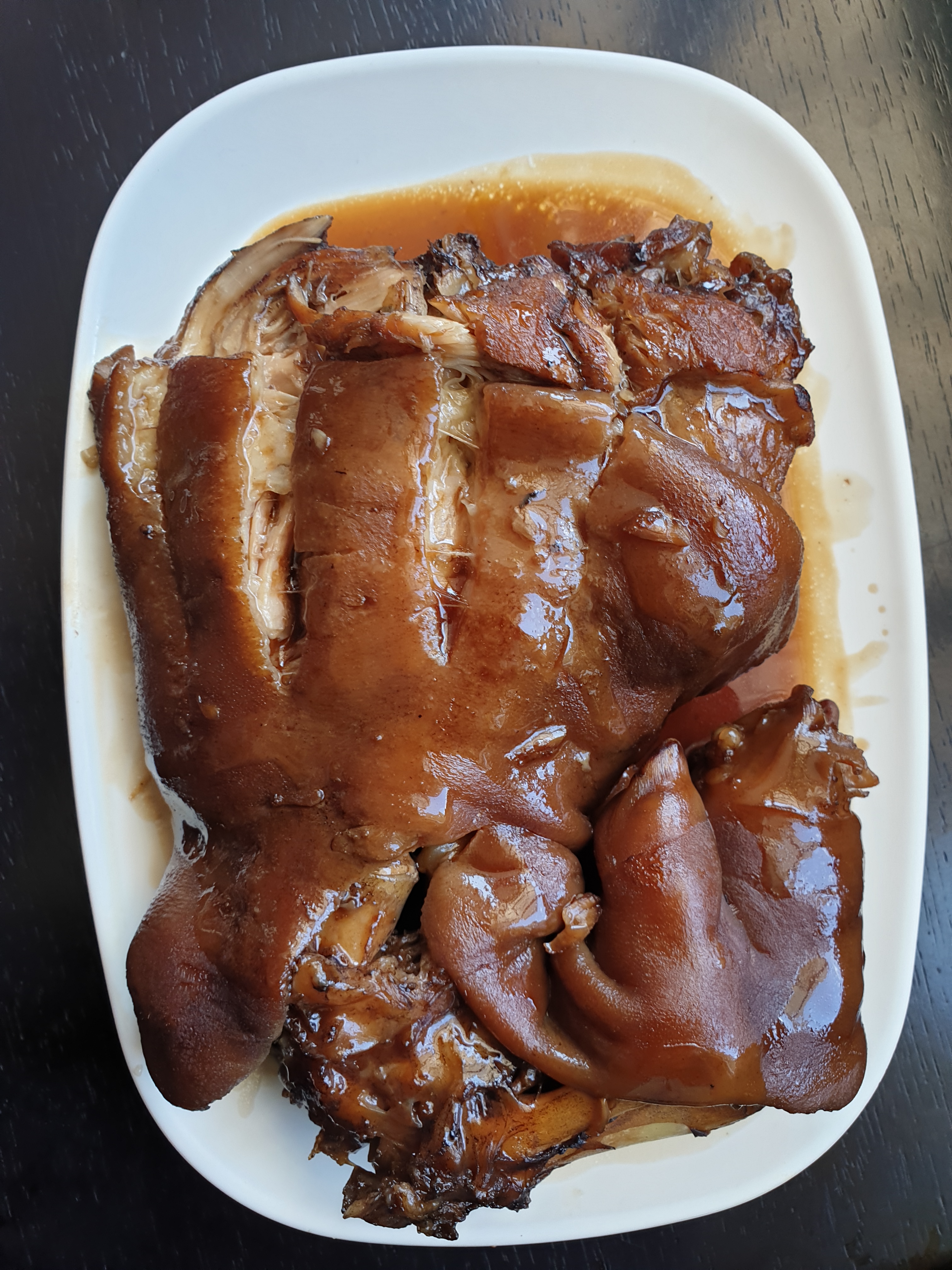 I was surprised by this because I can’t normally eat beyond 2 lumpias but their lumpia tasted more like a Chinese Kikiam so I was not able to control myself and ate many.

I am not a complete fan of this because it somewhat lacks in taste but perhaps it is a healthy dish so they keep it low on the salt. 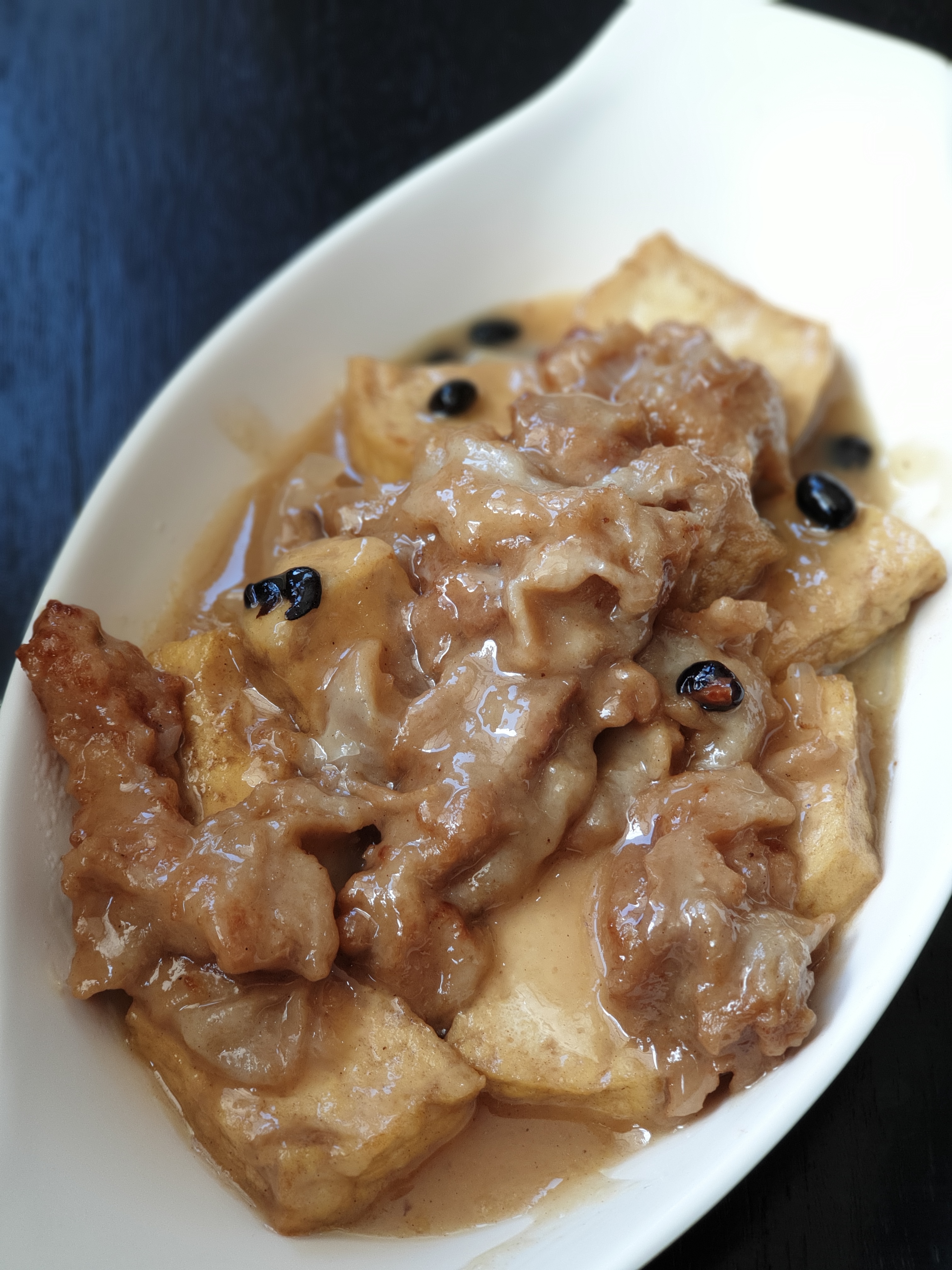 It’s my first time to see a noodle with red quail eggs. The owner said, this kind of noodle is served during engagements, probably the noodles represent long life while the eggs represent fertility. When I researched, this noodle is also served during birthdays. The noodles was both a feast for the eyes and the tummy as it had a lot of toppings that went well with the sauce. 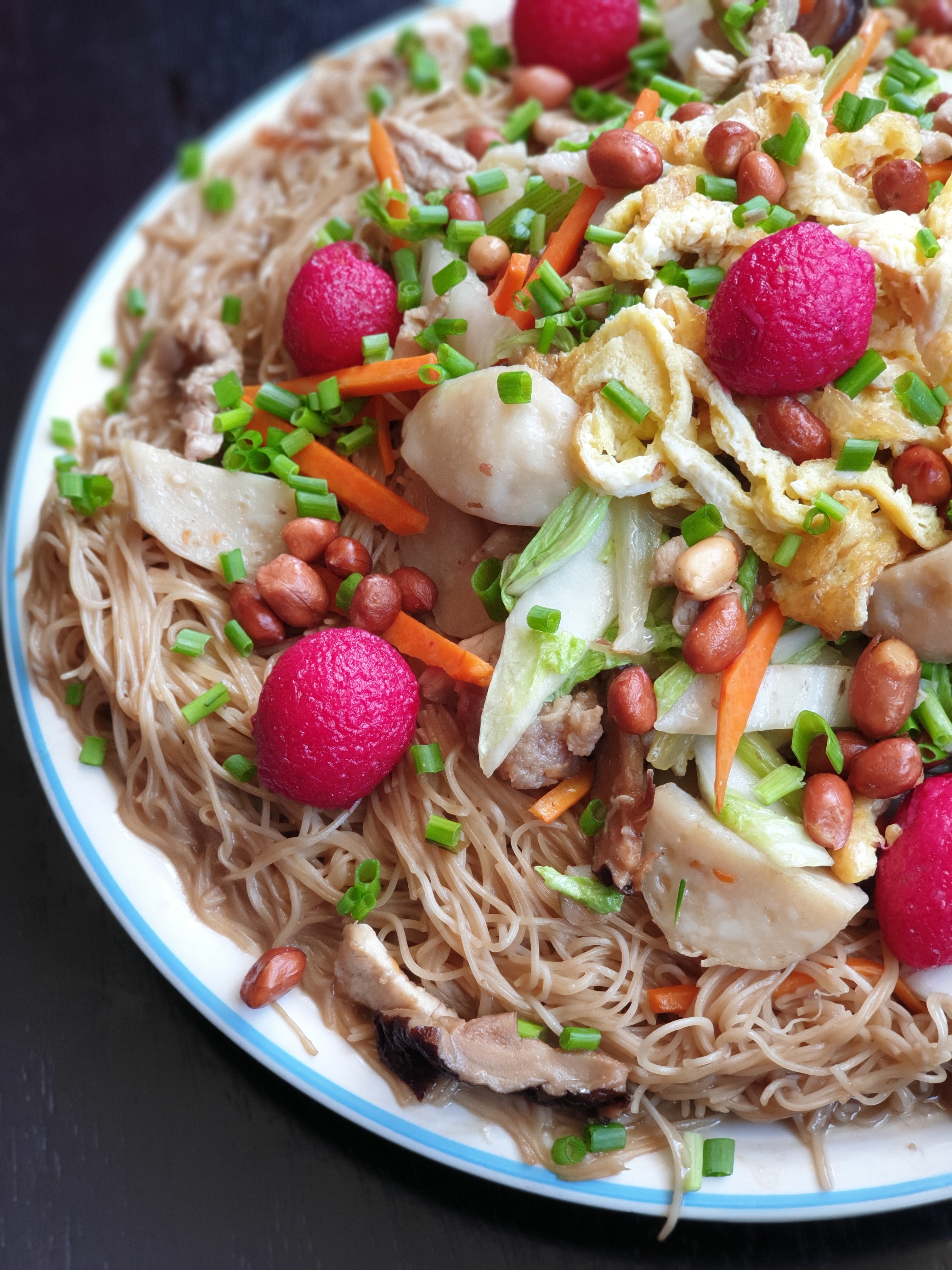 It’s a weird pansit but it works! It has squid balls, pork meat, veggies and a lot of scrambled egg on top. It tasted like curry and is a little spicy that makes it more interesting to eat.

I love a dish with ampalaya that is not bitter and this is a perfect example. Some of the beef are not that tender but I love the sauce that went with this dish. 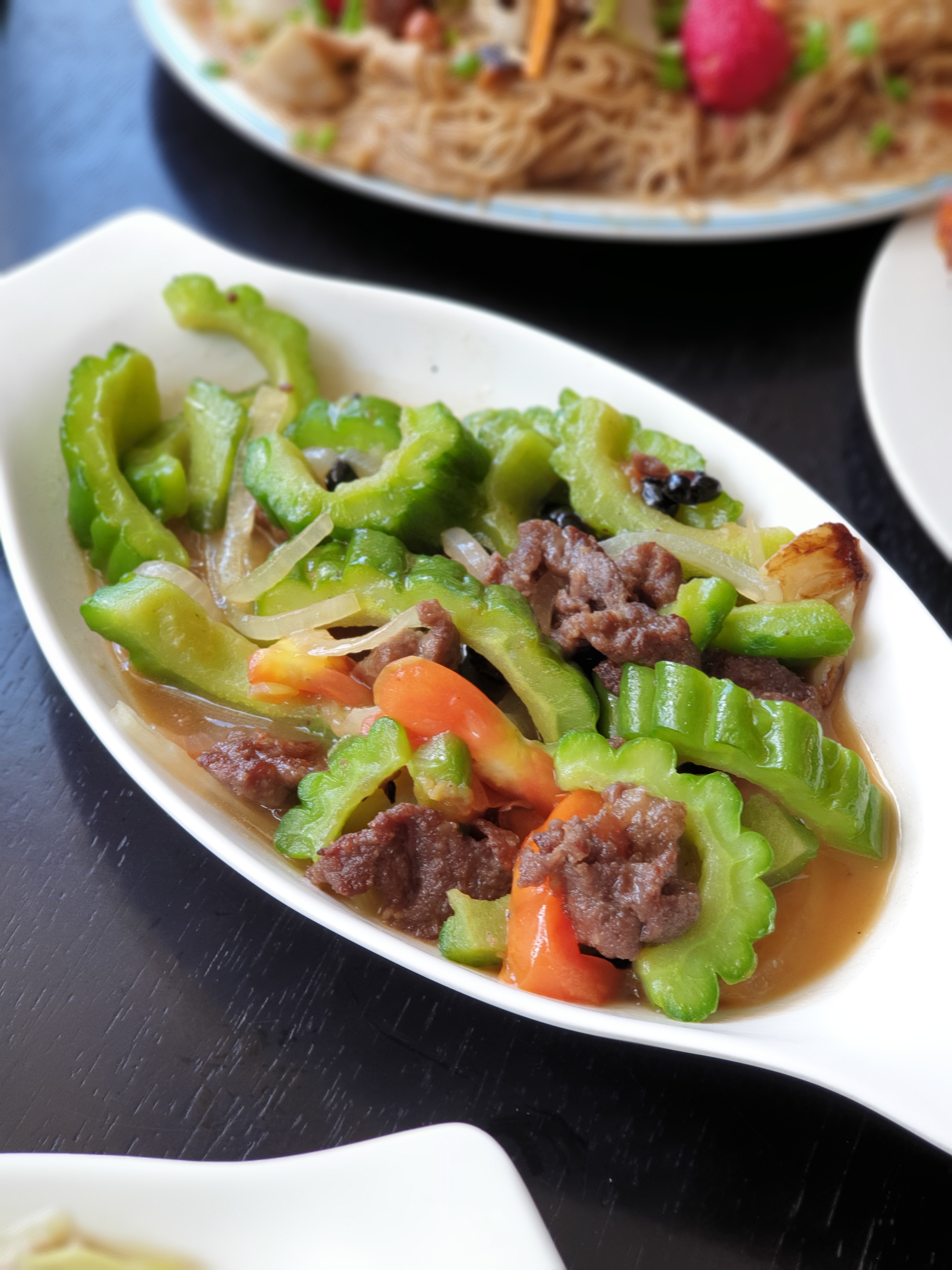 Not your typical chopsuey since this one is full of cabbage. I like its light sauce and bits and pieces of pork meat. You may choose to customize it by requesting other veggie ingredients. 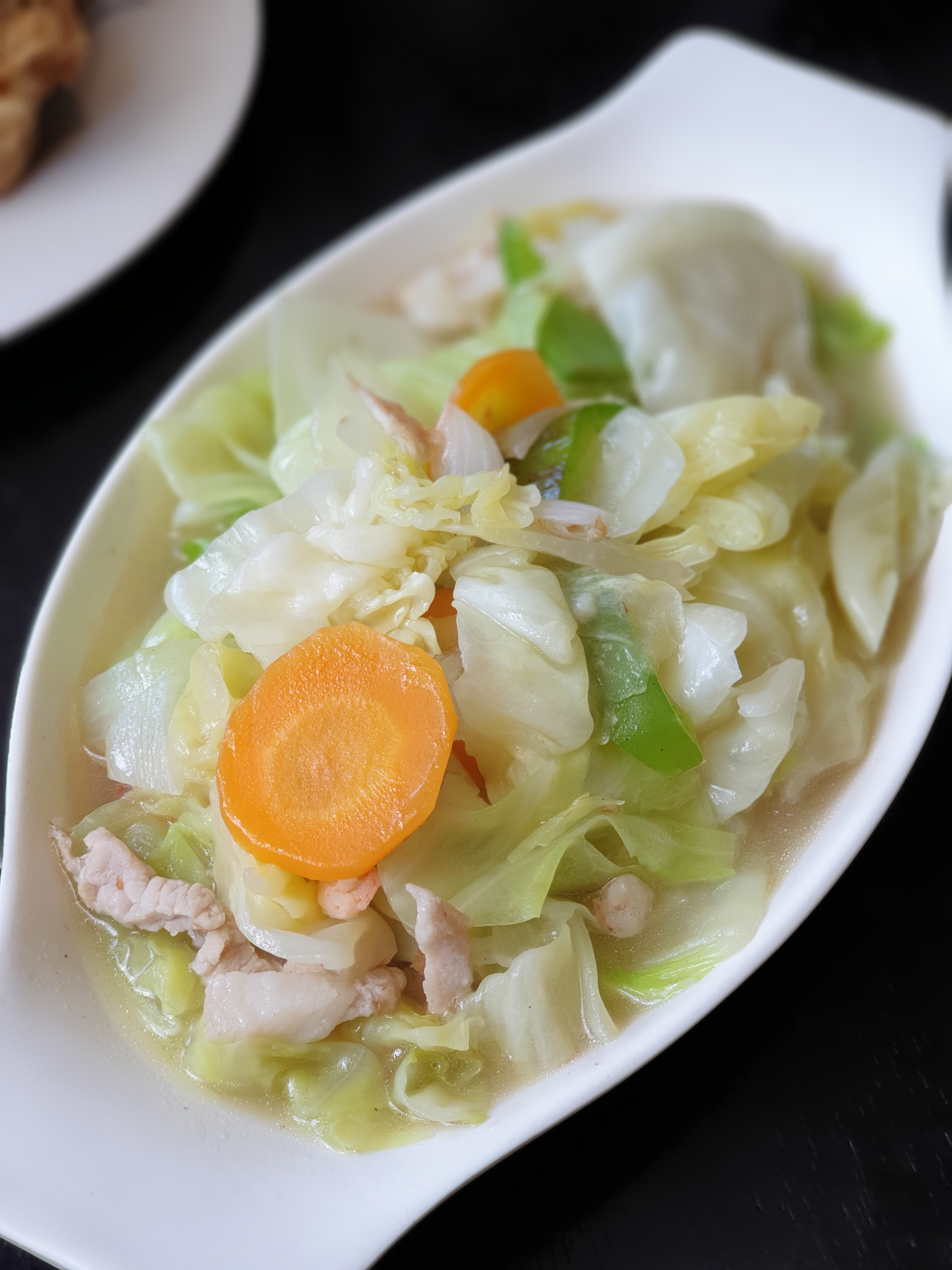 One of my fave choices for fried rice. It had mixed veggies and pieces of meat.

A more flavorful fried rice because of the small pieces of crab meat.

A not too sweet dessert to finish off that fantastic meal

The place was built by Jerwin Guan’s father during 1983 and the restaurant started doing deliveries and take-outs only. Though the place caught fire during 1992 and the family went thru some financial problems when his dad became sick, Jerwin still managed to keep his father’s legacy alive and thriving.

Now, they also cater and have a dine-in restaurant. The place is simple and has dining areas both on the first and on the second floor.

The staff were all friendly and gave us all our needs at once. They even stayed with us at the 2nd floor just in case we needed other assistance.

After the horrible fire incident, Jerwin realized he also wanted to help others by saving lives and property and so he joined the fire volunteers. When he was able to save enough to purchase his own fire truck, he established the Golden Fire & Rescue Volunteer Unit. 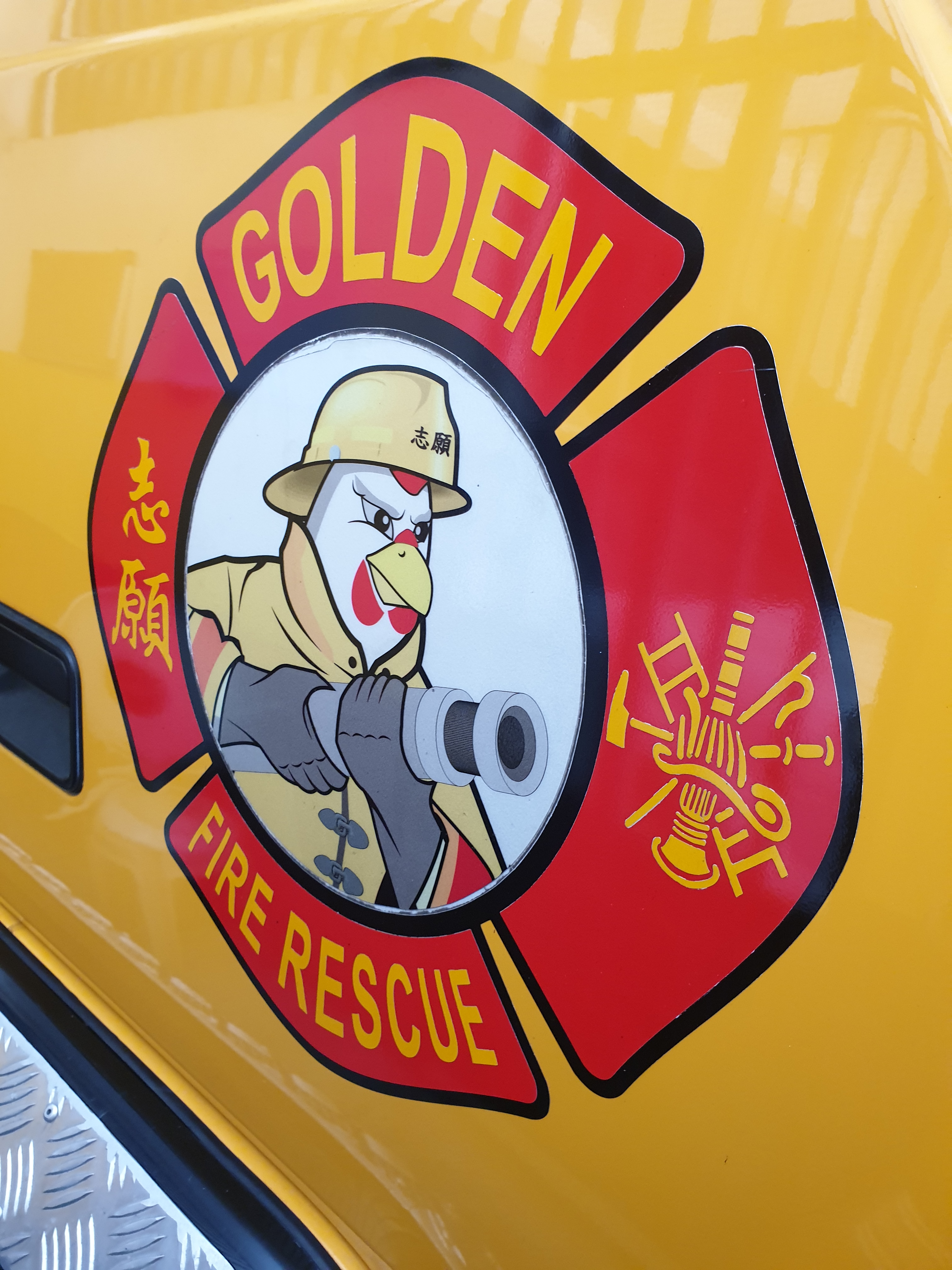 They now have 2 fire trucks and a fire station!

Not only that, he even built a 4-level, 23 rooms living quarters for his employees! 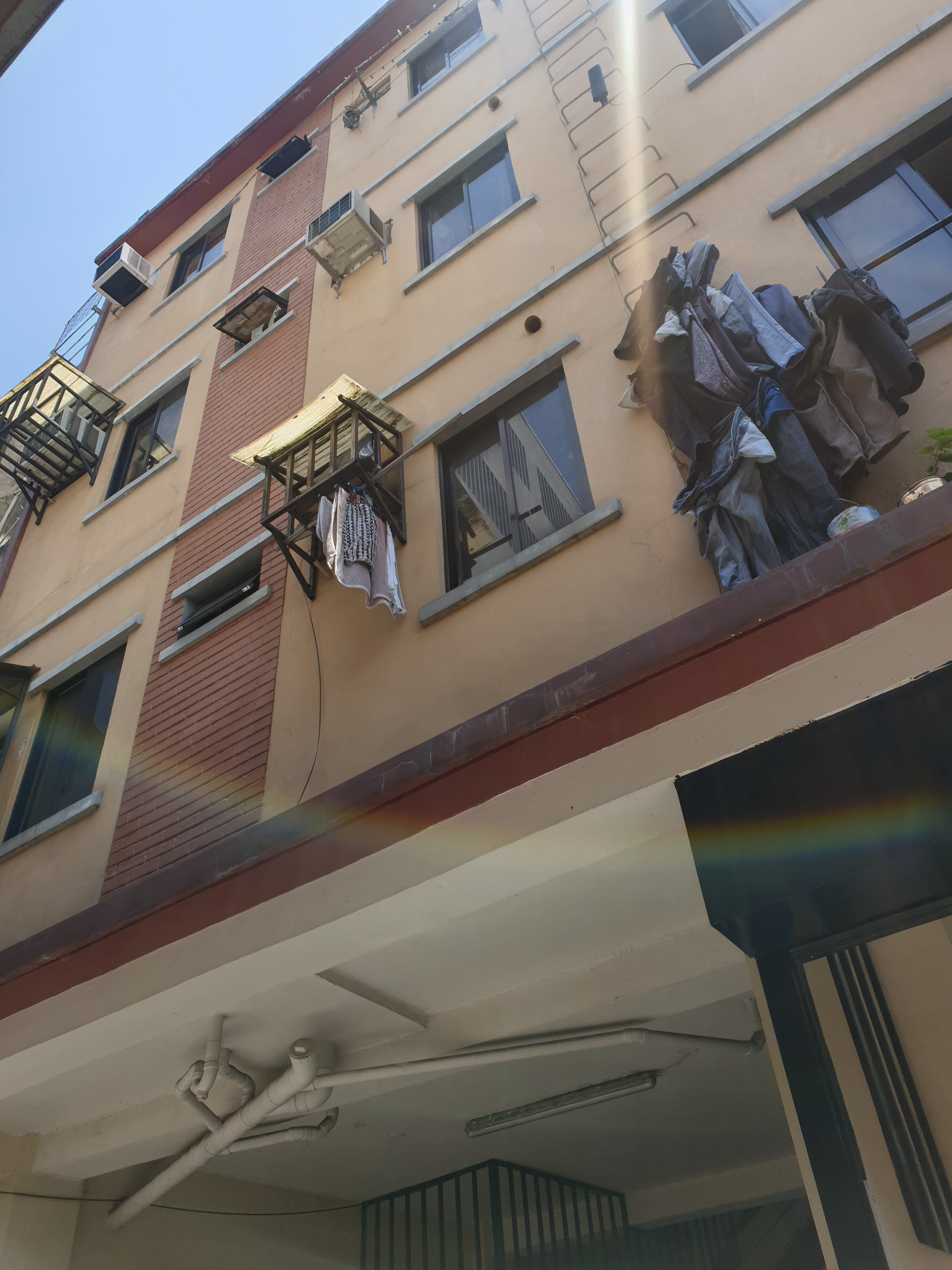 For me, Jerwin is the total epitome of the saying, “Share your blessings.” that is why he is blessed with good karma because all the funding for these come from The Golden Chicken House restaurant.

To know more about the restaurant, you may follow or contact them thru their social media accounts.